Audio Debate: Should the US State Dept Form A Commission To Restitute Stolen Art Now In US Museums? 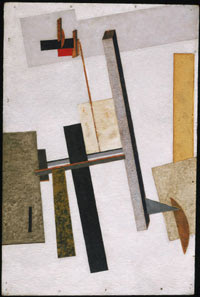 Tragically, the American museum community has played deaf dumb and blind when it comes to researching the stolen artworks in their collection:  artworks of European origin that entered the US after 1933 but were created before 1945.   After stuffing their collections with stolen artworks, they are hoping that the remaining Holocaust survivors will die before they are forced to reveal what is in their collections and return it to the rightful owners.   Hitler's actions were illegal for the winners of World War II: except to US museums who maintain that stripping Germany of its Jewish culture was perfectly legal.  Three generations of "art historians" have been produced in this nation's universities: almost no one has spoken out.  Is the issue cowardice or ignorance?

If US museums don't give back stolen artworks, the rest of Europe never will either.

***Provenance for Proun 2 (Construction) at Philadelphia Museum of Art


Städtisches Museum Halle, Germany, purchased 1929 [1]; Hanover Provinzialmuseum/Landesmuseum, Germany, on loan from Städtisches Museum Halle, 1929(?)-1937 [2]; confiscated by the National Socialist authorities, 1937, EK register number 14283 [3]; with Karl Buchholz, Berlin; with Curt Valentin, Buchholz Gallery, New York, 1939 [4]; sold to A. E. Gallatin, New York, 1939 [5]; bequest to PMA, 1952. 1. See Andreas Hüneke, Die faschistische Aktion "Entartete Kunst" 1937 in Halle (Staatliche Galerie Moritzburg Halle, 1987), p. 38, no. 42; and Peter Nisbet, ed., El Lissitzky 1890-1941, exh. cat., 1987, Proun inventory no. 14, p. 160. The acquisition is also noted and illustrated in Museum der Gegenwart 1 (1930/1931), p. 13. The painting was one in a total of 46 oil paintings, drawings, and watercolors by Lissitzky purchased by the Halle museum in that year (see Im Kampf um die moderne Kunst: Das Schicksal einer Sammlung in der 1.Hälfte des 20. Jahrhunderts, exh. cat., Staatliche Galerie Moritzburg, [1985], p. 48 and p. 52). 2. Alexander Dorner, the director of the Hanover Provinzialmuseum until his forced resignation by the Nazis in 1936, recollected that Mondrian's "Composition in Blue" (1952-61-87) and Lissitzky's "Proun 2C," both later purchased by Gallatin, hung in the famous Abstract Gallery (Abstraktes Kabinett) of the Hanover museum designed 1927-28 by Lissitzky (Cauman, The Living Museum, 1958, p. 55, repr. p. 62 and p. 63, respectively, both horizontally). The information that the painting was on loan to, rather than owned by, the Hanover museum is supplied by a 1958 Art News article in which the author, Ella Winter, quotes a letter from Dorner's widow stating that 'the Lissitzkys you refer to hung in the Abstract Gallery; it [the gallery] was destroyed by the Nazis while my husband was opening the first Munich exhibition in London. When he returned he found that unique and beautiful room dismantled and himself accused of promoting "degenerate" art. The Lissitzky on loan was sold . . . and is now in the Philadelphia Museum' [ellipsis is the author's] (see "Lissitzky: A Revolutionary Out of Favor," April 1958, p. 63). In addition, this painting is not listed in the 1930 catalog of works owned by the Hanover Provinzialmuseum (Katalog der Kunstsammlungen im Provinzialmuseum zu Hannover, Bd. 1, 1930). 3. The "EK" (Entartete Kunst) or confiscation register number 14283 is stamped on a sticker on the back of the painting (the original confiscation register is housed at the Zentrales Staatsarchiv Potsdam; see Barron, ed., "Degenerate Art", exh. cat., 1991, p. 132, n. 15). It is clear from the letter quoted in the Art News article cited above that the Nazis confiscated the painting from the Hanover museum. It is not certain where the painting was stored after confiscation; Mondrian's "Composition with Blue" (PMA 1952-61-87), also confiscated from Hanover, was stored at the Schloss Niederschönhausen, the Nazi sales repository for "Entartete Kunst" confiscated from museums. 4. Four prominent German dealers were appointed to market the inventory of confiscated works, including Karl Buchholz. According to the EK register, this painting was assigned to Buchholz, owner of the Buchholz Gallery in Berlin. He was the mentor and pre-war partner of Curt Valentin (1902-1954) who named the New York gallery he opened in 1937 in Buchholz' honor. Between 1934 and 1937 Valentin ran his own gallery in Buchholz' dealership in Berlin (Nicholas, Rape of Europa, p. 3, 24; Yeide, AAM Guide to Provenance Research, p. 239, 290). Valentin, a German citizen, left Germany in 1937 to go into exile. However, he maintained contact with Buchholz, frequently travelling to Germany, where he acquired works from the Schloss Niederschönhausen and the Lucerne 1939 auction. According to Nicholas he "was able to obtain from this source [Germany] much of the inventory which established him as a major New York dealer" (Nicholas, p. 24). Hüneke, underscoring the connection between Buchholz and Valentin, refers to the latter's New York gallery as "a ready-made platform from which Buchholz could sell to America" (see "Missing Masterpieces," in Degenerate Art, p. 129). 5. Receipt from the Buchholz Gallery/Curt Valentin to Gallatin dated August 24, 1939, for purchase of both the Lissitzky and Mondrian's "Composition with Blue" (stamped "Paid" August 31, 1939).