Stuart Weitzman LLC v. Microcomputer Resources Inc., 542 F.3d 859 (11th Cir. Sept. 12, 2008).
What happens when your custom computer programmer sends you a cease and desist letter telling you that you have the right to use the software they built for you, but that you do not have the right to possess the source code and that it "cannot be modified, changed or reverse engineered by anybody."
Well, the Stuart Weitzman people responded with a declaratory judgment action. They claimed that they were being accused of copyright infringement, that the subject matter was completely pre-empted, that there was a "case or controversy", that the court had federal jurisdiction. Seems pretty simple, right?
Wrong. The computer vendor had not registered the copyright in the software program, and Weitzman did not contest that the vendor owned the copyright. Nor could the Weitzman folks think up any state-law claims that they could seriously be sued for, which might raise a federal question to be decided (interpretation of the copyright act). Weitzman argued that the "federal question" raised was an anticipated copyright infringement action, and asked the court to construe Weitzman's defenses under 17 U.S.C. Section 117 (you are allowed to copy a computer program if such copying is necessary to run the program).
So the case was dismissed on subject matter jurisdiction, simply because the computer company had neither sued nor filed a copyright registration. This result appears to be anomalous and not in the spirit of other declaratory judgment cases. It is not clear that Weitzman showed how the business would be immediately and irreparably harmed by the cease and desist letter or that the controversy was "ripe".
Posted by Ray Dowd at Sunday, October 26, 2008 No comments:

The Pro-IP Act of 2008: Copyright and Trademark Enforcement

The legislation was vigorously opposed by the Department of Justice, find their position here courtesy of the EFF. The main objection is that the DOJ will now have the power to bring civil actions and is forced to turn the proceeds over to private industry, essentially making what is now a private system of enforcing copyright and trademark laws a government function. The DOJ also felt that appointment of an IP Czar with the duties described in the legislation would violate the principle of separation of powers between the Executive and Legislative branches of government.

Title I
· Title I enhances civil intellectual property rights laws and improves remedies. First, it adds a harmless error provision to the registration requirement for instituting a suit, so that an infringer cannot avoid liability based on a harmless error in a registration.
· Second, it gives copyright owners the same rights as trademark owners to impound records documenting the infringement, while including protections to ensure a court will issue an appropriate protective order.
· Third, title I increases statutory damages in counterfeiting cases and applies them not only to those who intentionally use a counterfeit mark, but also to those who supply goods necessary to the commission of a violation of the Trademark Act, if they intend that the recipient of the goods or services would put the goods or services to use in committing that violation.
· Finally, Title I applies the copyright laws not only to imported goods, but also to exported items.
Title II
· Title II improves and harmonizes the forfeiture laws governing intellectual property rights violations. It creates a new forfeiture section for both civil and criminal forfeiture, building off the model in the Protecting American Goods and Services Act passed in the 109th Congress. It protects against the possibility that third party information may be disclosed by including protections to ensure a court will issue an appropriate protective order with respect to information found on items seized.

[there is a fuller description on Sen. Leahy's site]

Here is the text of the Senate version of S.3325 courtesy of Wired. From the private litigant's perspective, note that 17 U.S.C. Section 411 is amended to permit infringements where the registration has certain inaccuracies, 17 U.S.C. Section 503 now permits seizure of the books and records of an infringer (subject to a mandatory court-issued protective order), a weapon that trademark plaintiffs have long had. For trademark cases, 15 U.S.C. 1117 has been amended to enhance statutory damages and to treble damages plus attorneys fees and prejudgment interest. Section 602 is amended to make exporting infringing goods a violation.

The press has picked up on the aspect of the legislation that appoints an Cabinet-level IP Czar called an IPEC. There are also extensive governmental agency reporting requirements on programs to exhort state and federal law enforcement authorities to learn and enforce IP laws.

Copyright is an area of the law in which federal law has completely preempted state law. Copyright and trademark laws have real teeth. Law enforcement officials and private practitioners are highly skilled in working together on these issues, particularly in combating piracy in the domestic U.S. IP laws are very confusing and hard to follow for people who do not have serious training. Senator Leahy should not be sending state troopers onto this well-trodden ground.

Let's hope the new President has a sensible approach to these issues. 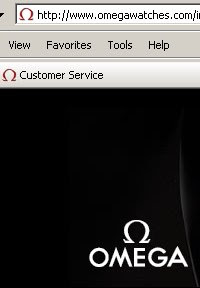 "When Daniel Craig reprises his role as James Bond in Quantum of Solace, he will be wearing an OMEGA Seamaster Planet Ocean 600m Co-Axial Chronometer with a black dial [ ...]. Bond fans and OMEGA enthusiasts will know that 007 has been wearing Seamasters featuring blue dials since 1995 so the black watch face on the Seamaster Planet Ocean in Quantum of Solace marks a departure for James Bond. "

The first sale doctrine is codified at 17 U.S.C. Section 109 (a) says that if you own a copy of a copyrighted work "lawfully made under this title", you can sell or "otherwise dispose of" it. Section 109(b) says that even if you own copies of phonorecords or software, you can't rent them.

The language seemed pretty clear. So when Costco bought genuine Swiss Omega watches through someone who purchased them from an authorized dealer in Switzerland, Omega thought it perfectly legal to sell them in the U.S. The U.S. district court judge agreed, awarding Costco hefty legal fees when Omega claimed that such importation of authentic, genuine, non-piratical watches that it owned.

Copyright owners often set up territories throughout the world and appoint distributors for various territories. When a purchaser from a high-cost territory buys the copyrighted work in a low-cost territory, this is known as "gray market" goods. Retailers save money by buying from the lower-cost territory.

In Omega S.A. v. Costco Wholesale Corp., 541 F.3d 982 (9th Cir. 2008), the Ninth Circuit reversed the district court and found that Omega could use Section 106(3) and 602(a) of the Copyright Act to claim copyright infringement for unauthorized distribution.

For the first sale doctrine to apply, there must be an authorized first sale in the United States. For a copy to be "lawfully made under this title [17 U.S.C.]" - it means made in the U.S.

The result is that even if you buy genuine copyrighted works from a foreign representative of a copyright owner, you infringe copyright if you import and sell them in the U.S. without the copyright owner's permission.

Will James Bond get busted for pawning his Swiss-purchased Omega in the U.S.?
Posted by Ray Dowd at Saturday, October 18, 2008 No comments: