I first wrote about the case here (Visual Artists Rights Act - Right to Display Works That Do Not Yet Exist - December 16, 2007).  The case involved a Swiss installation artist, Christoph Buechel (The "u" in Buechel has an umlaut, but Blogger, unless I am missing something, does not), who, without a clear written agreement, agreed with the Mass Moca to install one of his works.   It was agreed that Mass Moca would pay, and that Buechel would own the copy.

Buechel's installations have been likened to "bristling three-dimensional history paintings" yet are "so obsessively detailed that they might be described as panoramic collage" (full size images here). 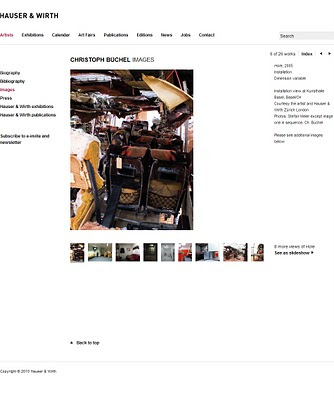 The District Court denied Buechel injunctive relief and granted summary judgment against him.   The fact pattern was a law professor's delight:  during the installation, Mass Moca's staff (being directed by emails from Switzerland, allegedly made aesthetic decisions against the artist's will, made "compromises" he did not agree to, covered the work in tarps (allegedly inviting sneek peeks) and held an exhibition next door, which purportedly was orchestrated to subject the artist to ridicule (a local paper referred to the art as "Crap under Wrap"). 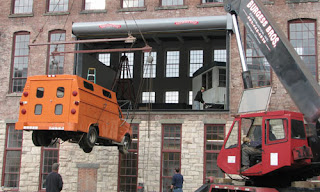 A few takeaways from a decision that reads like a Peter Greenaway film watches:

1.  artists have rights in unfinished works;
2.  installations are sculptural works;
3. unfinished works are sufficiently "fixed" to be copyrightable subject matter;
4.  if you are going to allege joint authorship (as Mass Moca did, you have to specifically allege your copyrightable contribution);
5.  if you are a museum, get VARA waivers in advance or a clear understanding in writing of who pays for what and what happens if things go wrong;
6.  VARA's moral rights include "attribution" and "integrity";
7. no statutory damages for violations of an artist's right of attribution;
8.   VARA does not include a right of "divulgation" (which sounds a lot like the "display" or "distribution" rights under the Copyright Act;
9.   If you are going to argue that someone violated your rights to prepare a derivative work, if you do not develop the argument on appeal, the court may find that you waived it;
10.  Even if VARA doesn't help you, go back to Section 106 and find another traditional copyright that's been violated and allege it.

Here is the court's summary of its own holdings:
1. VARA's protection of an artist's moral rights extends to unfinished creations that are “works of art” within the meaning of the Copyright Act;

2. The right of integrity under VARA protects artists from distortions, mutilations or modifications of their works that are prejudicial to their reputation or honor, and prejudice must be shown for both injunctive relief and damages;

3. Büchel has adduced sufficient evidence to raise a genuine issue of material fact as to whether MASS MoCA violated his right of integrity on one of his three asserted bases for liability, namely, by modifying “Training Ground” over his objections in a manner that harmed his honor or reputation. His right-of-integrity claims based on the yellow tarpaulins and the mere display of “Training Ground” lack merit;
4. Büchel's right-of-attribution claim is moot, as VARA provides only injunctive relief to protect the right of attribution and the installation no longer exists;

5. The record reveals a genuine issue of material fact as to whether MASS MoCA violated Büchel's exclusive right under section 106(5) of the Copyright Act to display his work publicly;

6. Büchel fails to adequately develop his claim that MASS MoCA violated his exclusive right under section 106(2) to prepare derivative works based on “Training Ground,” and that claim is therefore waived.

We thus remand the case for further proceedings on Büchel's remaining right-of-integrity claim under VARA and his public display claim under section 106 of the Copyright Act.

Although this has been billed as a victory for artist's rights, it showcases some of VARA's weaknesses (no $$$ for the artist if a right to attribution is violated).   It also means that every museum counsel in the country, if not the world, will be trying to force artists to sign away rights as a condition of display. 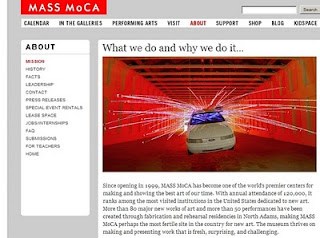 Again, a decision and a fact pattern worth reading and savoring, but a decision that seems to be unfortunate for Mass Moca, an institution that seemed to be trying to support the avant-garde in an idealistic and trusting, if perhaps misguided manner.
A scaled-down version of the installation was exhibited at Art Basel in Miami Beach in 2007 and sold.
Posted by Ray Dowd at Saturday, January 30, 2010