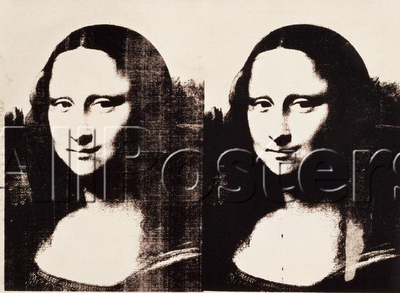 Double Mona Lisa (Andy Warhol, 1963)
It is clear that Warhol was using Leonardo Da Vinci's public domain image of the Mona Lisa.   He probably took the image from a photograph of of the Mona Lisa.    The case law says that exact images of public domain works are not protected by copyright.
But now we see Vik Muniz taking Warhol's arrangement of the "double" Mona Lisa - and putting Warhol's name in the title of the work - part of an ancient artistic tradition.  Muniz selects the fine art medium of peanut butter and jelly to execute his work.
Is the borrowing of Warhol's name and arrangement of a PD work ok?  Does the selection of peanut butter and jelly drive the transformative nature of the work?   And would the answer change if Warhol's work were an entirely original composition NOT based on a public domain work?   And does the number of copies matter?
I think Muniz's composition is strikingly original and beautiful masterpiece of 20th Century art.
Some thoughts for Fair Use Friday.  Meanwhile, watch the video to see whether scientists now believe that the Mona Lisa was pregnant.

If I use a painting in a film...let's say I have a character react to the painting...do I have to ask for permission? (let's say it is a recent painting...1946, Frida Kahlo)

Clemente: If you are making a film, you ordinarily need to clear (license) any copyrighted works that you use. This is not so much a product of copyright law and its fair use doctrine, but of E&O Insurance and the reps and warranties you would have to give any potential distributor (all of whom do not wish to litigate your fair use defense for you). The Center for Social Media has a handbook called Documentary Filmmakers' Statement of Best Practices in Fair Use.http://www.centerforsocialmedia.org/fair-use/best-practices/documentary/documentary-filmmakers-statement-best-practices-fair-use. So if Frida Kahlo's estate holds the copyright, you would license the use from them.

Is it possible to electronically modify the Mona Lisa for profit without incurring copyright problems?