Nondisclosure Agreements and Software Development: Where To Sue?

In re Limitnone LLC, -- F.3d---, 2008 WL 5254359 (7th Cir. December 19, 2008) gives us the answer. You may properly file a writ of mandamus. The decision on Findlaw is here. The original petition for a writ of mandamus is filed directly with the Court of Appeals, in this case the Seventh Circuit.

The factual underpinnings of the case are of great interest to software developers. Google and Limitnone signed a nondisclosure agreement ("NDA"). The NDA related to a program Limitnone had developed to move information from Microsoft Office apps to Google's competing apps. The program was called gMove. The NDA had a dispute resolution clause that venued all disputes in California.

The district court and Seventh Circuit found that the Beta License Agreement was not valid because it was not signed and was not in writing, and thus transferred the case to California. The odd thing is that the basis for the removal to federal court was that was that the Copright Act preempted the Illinois trade secrets statute relied on by Limitnone.

The Seventh Circuit held out the possibility that Limitnone might still make a motion for a remand.

If the action was improperly removed to federal court, then Limitnone might end up in a state court after all. 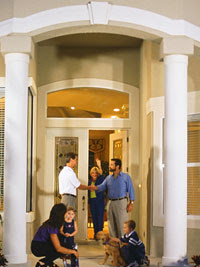 Intervest Construction, Inc. v. Canterbury Estate Homes, Inc., --- F.3d ---, 2008 WL 5274274 (11th Cir. December 22, 2008). The Eleventh Circuit considered a copyright infringement case involving two similar floor plans for a four-bedroom homes. The district court judge granted summary judgment in favor of the defendant. On appeal, the appellant argued that the lower court had inappropriately focused on the dissimilarities between the two floor plans and had not properly analyzed the similarities.

The Eleventh Circuit that architectural works such as floor plans are necessarily compilations of many standard elements, such as"common windows and other staple building components." Thus, what is protectible is an architect's arrangement of such standard features. Citing the U.S. Supreme Court's Feist decision, the court found the author's copyright in such a compilation to be "thin" and limited to the selection and arrangements of non-copyrightable elements. Thus, a "narrow analysis" of only the original arrangement is appropriate. In such a case, where there is a "substantial dissimilarity" of the potentially protectable elements, summary judgment is appropriate.

The Eleventh Circuit found that the district court appropriately did not consider the similarities in the plans which related mainly to such standard features, and instead properly analyzed the arrangement of such features, which was the potentially protected copyrightable contribution of the architect. Agreeing with the district court that "no reasonable, properly instructed jury could find the works substantially similar", the Eleventh Circuit affirmed.
Posted by Ray Dowd at Friday, December 26, 2008 No comments:

Can A Car Be a Copyrighted Character in a Film?

In Halicki Films LLC v. Sanderson Sales and Marketing, 547 F.3d 1213 (9th Cir. Nov. 12 2008), the Ninth Circuit Court of Appeals considered a dispute over the rights to merchandise the rights to a car named Eleanor in the 1974 film "Gone in 60 Seconds". The owner of the rights to the 1960 film licensed the rights to make a remake of the film (a "derivative work" under the Copyright Act). But the owner retained the right to "manufacture, sell and distribute merchandise utilizing the car known as 'Eleanor' from the Original [Gone in 60 Seconds]". The main question presented was whether the license agreement retained the rights to merchandise the "Remake Eleanor". The court found that the owner had retained the rights to "Remake Eleanor". An additional question presented was whether a car in a film could be a copyrighted character. The court discussed the caselaw distinguishing literary characters from comic book characters. Literary characters, such as Sam Spade are "difficult to delineate and may be based on nothing more than an unprotected idea". But comic book characters have "physical as well as conceptual qualities [and are] more likely to contain some unique elements of expression."
The Ninth Circuit found that "the Eleanor character"..."can be seen as more akin to a comic book character than a literary character." The court found that Eleanor "displays consistent, widely identifiable traits" and is "especially distinctive". The court based its finding on the fact that whenever a human tried to steal Eleanor, it became very difficult, and because the main human character referred to his long history with Eleanor. The Ninth Circuit remanded for a finding of whether Eleanor is entitled to copyright protection and for the district court to "examine whether Eleanor's physical as well as conceptual qualities and ... unique elements of expression" qualify Eleanor for copyright protection.
So the perfect gift for the copyright litigator who has everything? A DVD of the original 1974 and the 2000 Gone in 60 Seconds www.imdb.com. Spend your holidays discussing whether Eleanor is a copyrighted character. Compare Chitty-Chitty-Bang-Bang, Herbie the Love Bug and Stephen King's murderous Plymouth "Christine Plymouth "Christine". While Rudolph the Red-Nose Reindeer has my vote as a copyrighted character-component of Santa's sleigh, it is hard for me to see the copyrightable expression of a Ford Mustang outside its existance as an object, and no matter what the actions of humans surrounding the Ford Mustang may be, I can't see how that can be attributed to Eleanor. 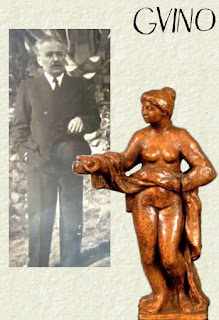 A series of sculptures was created and published by Pierre-Auguste Renoir in 1917 in France. Renoir died in 1919. The sculptures were published without a copyright notice. Guino died in 1973. In 1973 (56 years later) Guino (or his estate) obtained a determination in a French court that he was co-author of the sculptures, and was awarded a one-half interest in the sculptures.
In 1984, a company representing the joint interest of certain Renoir family members and the Guino family ("Societe Civile Succession Richard Guino") obtained US copyright registrations based on a claim that the sculptures were unpublished or first published in 1983.
In 2003, Jean-Emmanual Renoir, a great grandson of Renoir, sold "some of the sculptures, or molds or castings thereof" to a gallerist in Scottsdale, Arizona.
The Societe Civile Richard Guino sued Renoir's great-grandson for copyright infringement. Since works published prior to 1923 are all in the public domain, how could this possibly happen?
The Ninth Circuit took a case called "Twin Books" involving publication of the story of Bambi in Germany in 1923 without notice and again in 1926 with notice. The Ninth Circuit made a number of extrapolations from the Twin Books case. I won't go through the reasoning which involves the interplay of the 1909 Copyright Act, the 1976 Copyright Act and the Copyright Restoration Act, but suffice it to say that the Ninth Circuit's rule is that if an ancient Greek vase is discovered tomorrow, its copyright term would be the "finite term of seventy years after the death of the last author [under sections 303(a) and 302(a) and (b)] or December 21, 2047 whichever is later."
The case appears to hold that any foreign publication of a work without copyright notice is to be treated as if the work was not published.
The case is Societe Civile Succession Richard Guino v. Renoir, -- F.3d ---, 2008 WL 5142844 (9th Cir. December 8, 2008). Poor great-grandson Renoir and the gallerist to whom he sold the works also lost Lanham Act claims for false advertising. Rebecca Tushnet's here, and Michael Atkins here. William Patry, who calls the case a "brain-teaser" here. Renoir-Guino photos found here. 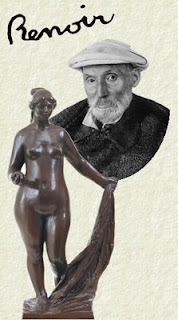