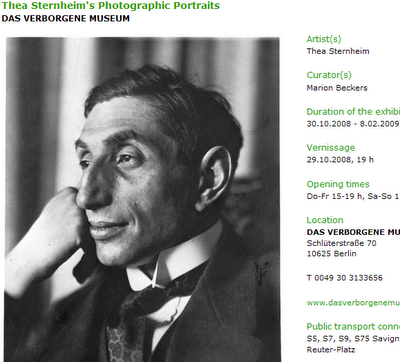 Thea Sterheim's 1911 Portrait of Alfred Flechtheim
The art press in the United States and art historians here have obliterated Alfred Flechtheim from the history of 20th Century Art.  In Germany, where Holocaust denial is illegal, museums are starting to confront the truth about the Nazi liquidation of Flechtheim's collection, and a critical press is scolding museums who are not doing the right thing.
New York's art press is asleep at the wheel.   My earlier posts on Flechtheim here.
Translation of the article “Er war sein bester Kunde” by Tobias Timm in Die Zeit - Nr.28 - July 8, 2010 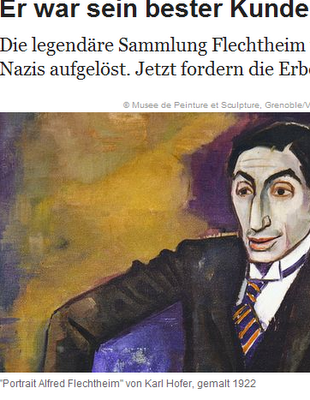 He Was His Own Best Client

The legendary Flechtheim collection was liquidated by the Nazis. Now the heirs demand justice.


This case concerning unresolved Nazi-history is of such a dimension that it will probably occupy the biggest German museums for months, if not for years. It appears as if artworks that once belonged to the art dealer and publisher Alfred Flechtheim are hanging in dozens of institutions such as the Ludwig Museum in Cologne, the Bavarian State Collection of Paintings in Munich, the State-Gallery Stuttgart or the Berlin State Museums. Last week it became public that the heirs of Flechtheim are claiming back a portrait of the actress Tilla Durieux by Oskar Kokoschka from the Ludwig Museum. Further requests and restitution demands apparently concern major works by Max Beckmann, Paul Klee and Pablo Picasso.

Alfred Flechtheim was a central figure of the art market in the Weimar Republic. After Paul Cassirer, he is considered among the most important patrons of avant-garde art. Born in 1878 as the son of a successful wheat dealer, he started collecting art around 1900. In 1913 he opened his own gallery in Dusseldorf. After the First World War, in which Flechtheim served as a cavalry officer, he moved to Berlin. With dozens of exhibitions, he successfully represented the French cubists, in addition to George Grosz, Willi Baumeister, and Paul Klee. Flechtheim was also what is most despised among art dealers – he was his own best client.

Flechtheim was not only dealing and collecting, he also wrote art critiques, founded the magazine Querschnitt and enriched the Berlin society life with salons and soirees. “If I was a painter” the Boxer Max Schmeling writes in his homage to Flechtheim at is 50th birthday in 1928 “I want to be in Flechtheim’s stable”.

Already before the Nazis came to power the dealer was bombarded with hate articles by Nazi authors who recognized Flechtheim’s significance regarding the art that they denounced as degenerate. This led to Flechtheim fleeing already at the end of 1933, over Zurich and Paris to London where he died in 1937, probably due to blood poisoning.

Flechtheim’s gallery was immediately aryanized, and his private collection, which included works by Pablo Picasso, Juan Gris, Fernand Leger, Willi Baumeister and Vincent van Gogh was liquidated from 1933 on under the pressure of Nazi persecution. For the past two years, Flechtheim’s heirs, with the help of lawyers, have been searching for the paintings and sculptures from the former Flechtheim collection. The whereabouts of various paintings is unclear today, but a good hundred of them, estimates the Marburg lawyer Stötzel, ended up in museums in America and Germany. Many of the artworks will have to be restituted by public museums in accordance with the Washington principles regarding transaction involving Nazi looted art.


The Durieux portrait by Kokoschka, for example, belonged to Flechtheim’s private collection and was sold to the collector Josef Haubrich in 1934 by the “aryanizer” of his Dusseldorf gallery, Alex Vömel, for 1800 Reichsmark, a price that was below the 1931 insurance value of the painting. The low price and the absence of records proving that Flechtheim received the sales proceeds from Vömel and that he was able to freely dispose of the sales proceeds, make this a clear case of Nazi looted art, according to the heirs’ lawyer.

The City of Cologne has, however, refused to give the painting back so far. The provenance of the painting, says Kaspar König, director of the Ludwig Museum, to ZEIT, is not fully resolved. He says the history is more complex, but details will not yet be published since research is still ongoing.


Exactly which paintings are being claimed back by the heirs from different museums is something neither the attorney nor the museums involved wanted to comment on. The Hamburg Kunsthalle, however, known for their special commitment to provenance research, was able to successfully exclude that Klee’s Felsige Küste (1931) was from Flechtheim’s collection. In contrast to this, other museums, eleven years after their commitment to the return of looted art, are showing only little impetus to research their holdings.

Museums stonewalling Jews is nothing new, but it is good to see that the German press is critical of museums that do not return art stolen from Jews.

In the U.S., museum directors who hold on to artworks stolen from Jews get big promotions.  When will any American museum recognize Flechtheim's contribution to 20th Century art?  And when will they admit that the art in their collections was stolen from Flechtheim by a Nazi?   If a German newspaper can publish these things, why won't the New York Times?