Fair Use Fridays: Statue of Liberty in Public Domain 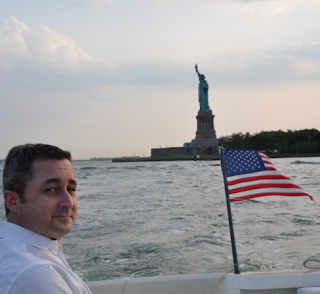 Fair use Friday photo of yours truly by NY real estate guru Paolo Zampolli.  Good example of photographing a public domain sculpture (the copyright expired) and a U.S. government work - the U.S. flag (not subject to copyright).   Despite Paolo's best efforts and the tour of New York Harbor on his luxury speedboat, I did not purchase the Statue of Liberty, despite the excellent price Paolo offered. :-)
Italicized text and images below from http://www.loc.gov/wiseguide/oct04/statue.html 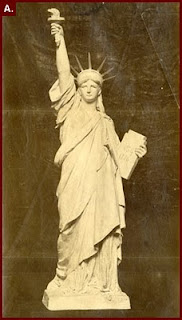 Designed and executed by French sculptor Frederic Auguste Bartholdi, the Statue of Liberty was presented by the people of France to the people of America to honor the friendship between the two nations. The statue's significance has broadened over the years, and it is now recognized throughout the world as a symbol of liberty and freedom. Erected on Bedloe's Island in New York Harbor and dedicated on Oct. 28, 1886, the statue has stirred the emotions of millions.

On Aug. 31, 1876, the Copyright Office issued copyright registration number 9939-G for the "Statue of American Independence" as the Statue of Liberty was first named. The copyright claim was filed in America's centennial year, a decade before the statue was erected in New York Harbor. Deposited with the application in the Copyright Office were two rare images. The first is a photograph of the artist's final study model, believed to be executed in terra cotta. The second image is an artistic rendering of how the statue would appear against the New York skyline after it was finally erected on the pedestal designed by architect Richard M. Hunt. This second image has great significance because it shows a very early version of the statue that most people would not recognize. In the original design, the Statue of Liberty is shown holding in her left hand a broken chain and shackle, which represent freedom newly achieved. Bartholdi later made a major change to his design by placing the chain and shackle, symbolically broken by Liberty, at her feet. He then positioned the familiar tablet, inscribed "July IV, MDCCLXXVI" (July 4, 1776), in her left hand. 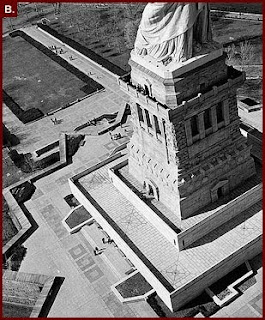 In 1984, curators working on the Copyright Office exhibition "By Securing to Authors: Copyright, Commerce and Creativity in America" came across this copyright with rare attached documentation. The historic images described above are on permanent display in the exhibit on the fourth floor of the Madison Building (Monday - Friday, 8:30 a.m. to 5 p.m.), along with documentation for the copyright on the pedestal.


Many images and renderings of the Statue of Liberty, including some that reveal interesting details of this symbol of American freedom, are in the Prints and Photographs Online Catalog. Just type "Statue of Liberty" in the search box. The Historic American Buildings Survey has also documented this work extensively. These images are in the American Memory collection "Built in America." Type "Statue of Liberty Liberty Island" in the search box. The 230 black-and-white photos are older images; the 51 color transparencies offer extraordinary views of the statue during its most recent restoration.


Since the copyright registration and deposit system was centralized in the Library of Congress in 1870, more than 30 million creative works have been registered for copyright protection.