HT to Mike Masnick of Techdirt.  Not only is Dan Pink's video by RSA Animate (embedded below) thought-provoking and relevant to whether or not money stimulates creative activity.  It is also relevant to the core purpose of the Copyright Act and arguments raised in defense of draconian copyright: whether or if financial incentives stimulate creativity.  Studies by the Federal Reserve and MIT raise the question of whether financial incentives actually decrease creativity.

Anyone trying to get more productivity out of an organization without spending more money ought to take these studies very seriously.

Far Copyleft folks see copyrighted works as mere free raw materials for creating new works.  The far Copyright folks see a copyrighted work as a sacred, inviolable and untouchable iconic thing that may only be accessed when, how, for how long and as often as the copyright owner dictates.

Far Copyright folks see a copyright as a complete monopoly from which windfall profits are to be extracted every time a new technology emerges to make a consumer's old licensed copy of a work obsolete or every time a consumer wants to use or dispose of the copy as he or she sees fit. The first sale doctrine lets us resell a car we've purchased without paying the manufacturer. Restraints on the alienation of property are disfavored in the common law because this blocks free economic activity. 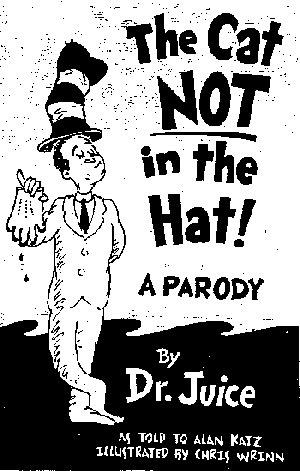 The issue I think was wrongly decided in Dr. Seuss v. Penguin Books, a Ninth Circuit case decided in 1997.  Here is how the court handled the issue of parody?
It is the rule in this Circuit that though the satire need not be only of the copied work and may . . . also be a parody of modern society, the copied work must be, at least in part, an object of the parody, otherwise there would be no need to conjure up the original work. . . . By requiring that the copied work be an object of the parody, we merely insist that the audience be aware that underlying the parody there is an original and separate expression, attributable to a different artist.

* * *
We now turn our attention to The Cat NOT in the Hat! itself. The first two pages present a view of Los Angeles, with particular emphasis on the connection with Brentwood, given the depiction of the news camera lights. The story begins as follows:

A happy town Inside L.A. Where rich folks play The day away.
But under the moon The 12th of June. Two victims flail Assault! Assail! Somebody will go to jail!
Who will it be? Oh my! Oh me!


The third page reads: "One Knife? / Two Knife? / Red Knife / Dead Wife." This stanza no doubt mimics the first poem in Dr. Seuss' One Fish Two Fish Red Fish Blue Fish: "One fish / two fish / red fish / blue fish. Black fish / blue fish / old fish / new fish." For the next eighteen pages, Katz writes about Simpson's trip to Chicago, the noise outside Kato Kaelin's room, the bloody glove found by Mark Fuhrman, the Bronco chase, the booking, the hiring of lawyers, the assignment of Judge Ito, the talk show interest, the comment on DNA, and the selection of a jury. On the hiring of lawyers for Simpson, Katz writes:


A plea went out to Rob Shapiro Can you save the fallen hero? And Marcia Clark, hooray, hooray Was called in with a justice play.
A man this famous Never hires Lawyers like Jacoby-Meyers. When you're accused of a killing scheme You need to build a real Dream Team.
Cochran! Cochran! Doodle-doo Johnnie, won't you join the crew? Cochran! Cochran! Deedle-dee The Dream Team needs a victory.
These stanzas and the illustrations simply retell the Simpson tale. Although The Cat NOT in the Hat! does broadly mimic Dr. Seuss' characteristic style, it does not hold his style up to ridicule. The stanzas have "no critical bearing on the substance or style of" The Cat in the Hat. Katz and Wrinn merely use the Cat's stove-pipe hat, the narrator ("Dr. Juice), and the title (The Cat NOT in the Hat! ) "to get attention" or maybe even "to avoid the drudgery in working up something fresh." Acuff-Rose, 114 S. Ct. at 1172. While Simpson is depicted 13 times in the Cat's distinctively scrunched and somewhat shabby red and white stove-pipe hat, the substance and content of The Cat in the Hat is not conjured up by the focus on the Brown-Goldman murders or the O.J. Simpson trial. Because there is no effort to create a transformative work with "new expression, meaning, or message," the infringing work's commercial use further cuts against the fair use defense. 9 Id. at 1171.


So if I want to draw former President George W. Bush as Mickey Mouse and parody him by placing him in a Mickey/Minnie scenario, by this logic Disney can stop me from engaging in this core political speech because I am not making fun of Mickey, only of the former President.

How to permit political speech, promote creativity and maximize economic welfare for both copyright creators and society in general are questions implicated in these debates, with the cultural pendulum slowly swinging towards the Remix culture camp. There are a few signs that legal culture is moving in that direction, with judges taking a more expansive view of fair use.

When the Copyright Society had its convention in New Orleans a few years back, I was struck by the plight of Jazz musicians: they didn't have the right to a compulsory license.   So a bunch of white kids doing an exact cover of a Led Zep tune can force Led Zep to license the song at a cheap rate.

But Jazz - which remixes, rearranges and is an art form that is derivative - can't get a compulsory license, and the changes and modifications to the original can't be protected without an additional license from the copyright owner - even though a sound recording in a cover song can.

According to the jazz musicians, the licensing practices of copyright owners have put them out of making a living and basically strangled their creativity.  It was a heartbreaking presentation. Jazz and its successors which rely on sampling, borrowing, remixing - all activities emanating from African-American traditions - have been severely penalized, to the point of practical extinction.


The Remix movie- with a white kid p/k/a Girl Talk at its center - shows how new technologies open up new creative possibilities.   And as white kids start looking to play a kind of American jazz with video, it is more likely that the courts will be more reluctant to penalize and criminalize that activity.

The video below is also a great example of using art to make a sound recording come alive through a new layer of creative labor.

Thanks Ray - great piece linked to great content. Good view on change in the system - nice to draw attention to it!