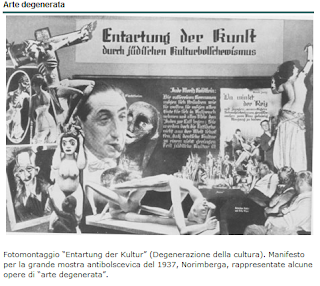 Unlike U.S. museums that have refused to disclose or publish evidence on the provenance of artworks in their collections, German museums are collaborating to trace the artworks that were looted from the collection of Alfred Flechtheim in 1933 and to celebrate the dealer's accomplishments.  I have included the full text of the press release below. 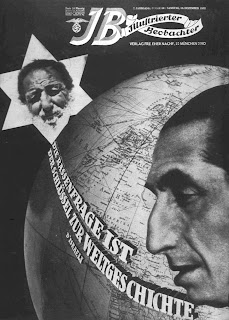 Alfred Flechtheim's Famous Nose on Cover of 1932 Nazi Propaganda Magazine
﻿
U.S. museums such as the MoMA proudly display artworks stolen from Flechtheim, and have essentially written Flechtheim out of the 20th Century in an effort to promote the supposed artistic acumen of Alfred Barr, the architect of the MoMA's dealings with the Nazi regime and the instigator of MoMA's dubious postwar acquisitions. 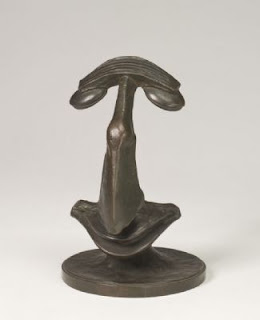 Alfred Flechtheim by Rudolph Belling
﻿
In reality, Flechtheim had a tremendous influence on the MoMA and Barr. MoMA's early exhibitions spearheaded and championed by Barr recreated and pretty much reassembled exhibitions Flechtheim had already done in Berlin.  Swiss historians long ago published a report finding that Flechtheim and his gallery had been "Aryanized" in 1933.   German museums are slowly doing the right thing in trying to assemble scholarship and untangle the mess created by the Nazi thefts and by unscrupulous art dealers in the post World War II period.  Why can't or won't U.S. museums do the same?  Is it anti-Semitism that leads them to write this great Jewish man out of the history of 20th Century art?  Or is it the knowledge that scholarship will lead to the revelation that Alfred Barr knowingly purchased bargain-basement artworks that he knew belonged to persecuted Jews and artists like George Grosz? 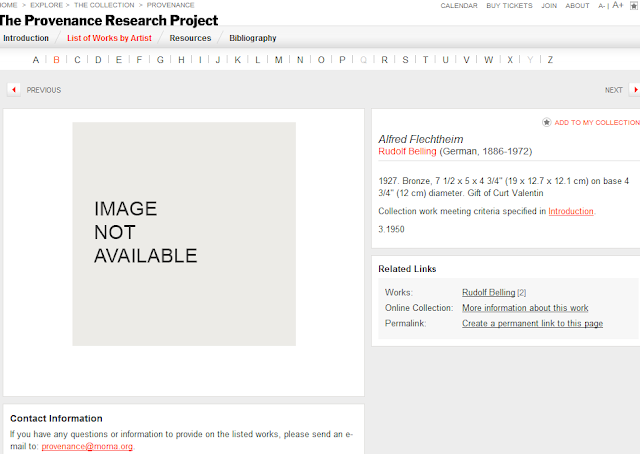 U.S. museums continue to stonewall provenance inquiries or to publish research on their collections.  It is time for Congress to look hard at giving huge tax breaks to institutions that assist tax dodgers to foist stolen art on an unsuspecting public.

If you care about this issue, please read my article in the Rutgers Journal of Law and Religion:  Nazi Looted Art and Cocaine: When Museum Directors Take It, Call The Cops

Museum Kunstpalast Düsseldorf
Duration of the exhibitions:         October 2013 – February 2014
Go-live date for website:             09.10.2013
The gallery owner Alfred Flechtheim (1878–1937) was a major protagonist in the art scene during the first third of the 20th century. His commitment to the Rhineland Expressionists, the French avant-garde and German Modernism and his support of important artists such as Max Beckmann, George Grosz and Paul Klee made him internationally famous even during his lifetime. The National Socialist regime, however, changed his life and that of his family drastically. Flechtheim had to leave Germany in October 1933. As an art dealer of Jewish extraction he suffered public defamation and, by 1935, had closed his galleries in Düsseldorf and Berlin and transferred the artworks he still possessed abroad, mostly to London, where he died in 1937 at the age of just 59 as the result of an accident. His wife, Betty, committed suicide in 1941 in the face of her imminent deportation. The remaining works of art in their flat in Berlin were confiscated and their whereabouts remains unknown to this day.

100 years ago Alfred Flechtheim opened his first gallery in Düsseldorf on 9 October 1913. His activities as an art dealer have left their mark in numerous museums to this day in the form of major works of art. These works, acquired through his galleries, have made and still continue to make a decisive contribution towards defining the profile of each respective museum. Almost all leading museums of modern art in Germany and abroad have works by Ernst Barlach, Max Beckmann, Heinrich Campendonk, Lovis Corinth, Paul Klee, George Grosz, Oskar Kokoschka, Paula Modersohn-Becker, Wilhelm Morgner, Heinrich Nauen, Max Pechstein, René Sintenis, Edgar Degas, André Derain, Juan Gris, Fernand Léger, Aristide Maillol, Henri Matisse, Edvard Munch, Pablo Picasso or Paul Signac with a Flechtheim provenance in their holdings.
The aim of this project is to trace the path these works of art took before arriving in the museums, their provenance and their sales history from the artist to the dealer and collector. Particular attention is placed on the time Alfred Flechtheim dealt with the works as well as the circumstances under which these were ultimately acquired by the respective institutions.
Participating museums are displaying works of art to the public that have an ‘Alfred Flechtheim’ provenance in the form of exhibitions and presentations of works in their own rooms (see below).
The database generated website www.alfredflechtheim.com provides an overview of the complete exhibition with all works that have a connection to the Galerie Flechtheim and are now in the 15 museums participating in the project.
The exceptional influence Flechtheim had as an art dealer, the abrupt break in his personal biography and the feeling of loss this brought about, as well as the tragic fate of his family, are all reasons for dedicating a project to his life and work.


Database generated website www.alfredflechtheim.com
The database generated website www.alfredflechtheim.com provides background information (title, date, medium, dimensions, time of acquisition and present whereabouts) on the more than 300 works, as well as relevant information on their provenance, a bibliography and description of the works. By logging into the website visitors can search the works according to these criteria and create their own, personal, virtual exhibition tour.
As a result of the ‘Degenerate Art’ campaign numerous works of art acquired through Alfred Flechtheim were confiscated and removed from museums in 1937. Those works that are still missing to this day are also documented on the website.
In addition Flechtheim’s relationship to the artists he represented is also documented in detail. These descriptions in the more than 80 artist/dealer biographies open up the world of Alfred Flechtheim’s galleries and show how varied and unusual the art dealer’s commitment was to Modernist art and the avant-garde. It reveals that Flechtheim was primarily a representative for those artists who were ostracised by the Nazis and whose works were banned to the depots and confiscated in 1937.
The website also addresses the life and work of Flechtheim, how well he was received, the art business and provenance research. For the very first time pictorial material can be seen of unpublished, original correspondence between Flechtheim’s galleries and museums, images documenting the backs of artworks and photographs showing Flechtheim with his art dealer colleagues.
The website www.alfredflechtheim.com will go live on 9 October 2013.


Exhibitions and presentations of works
From 9 October 2013 onwards the museums will jointly be showing works with a Flechtheim provenance from their collections in a total of 14 exhibitions and presentations of works, under the same title: Alfred Flechtheim.com Art Dealer of the Avant-Garde.
The works came into the various collections along a number of different routes. Some institutions acquired them directly from one of Flechtheim’s galleries, received them as gifts from the gallery or through its intervention. Others arrived at various times as bequests or gifts from third parties. After 1945, purchased works were acquired by other art dealers and private collectors, having either passed through Alfred Flechtheim’s galleries or as a result of arrangements made by him. The works of art presented (paintings, works on paper and sculptures) are marked with a uniform graphic logo and information on their origin and history. This is complemented by a biography on Alfred Flechtheim.


Reception
Alfred Flechtheim enjoyed an international reputation and had an impressive network of contacts. Hermann Lange, a textile manufacturer and collector called him a ‘pan-European’ who furthered relations between Germany and France. The flag at the Park Hotel in Düsseldorf should be flown whenever he was in the city as he brought Parisian air with him to the Rhine. In April 1928, in a publication on the illustrious art dealer entitled Querschnitt durch Alfred Flechtheim to mark his 50th birthday, one article recorded that Flechtheim should always remember the esteem in which he was held as a citizen in his native city. It was however only five years later, in March 1933, that an auction jointly organised by Flechtheim and the Hugo Helbing and Georg Paffrath galleries was violently interrupted by the NSDAP. On his 55th birthday, a hate article was published in ‘Volksparole’ in which a massive, anti-Semitist attack was launched against Flechtheim himself and his artists. In October 1933, one month after the Reichskulturkammer was founded, with the Propaganda Minister Joseph Goebbels at its head, Flechtheim assessed his position as an art dealer with a Jewish background with infallible precision. Having been the subject of vehement public defamation early on, he left Germany and tried to find a foothold once again as an art dealer abroad. He died in 1937 at the age of just 59 in London.
The art critic Paul Westheim who had emigrated to Paris wrote in Flechtheim’s obituary that he had just succeeded in building up a new existence in London and, through his involvement with the Mayor Galley, had staged exhibitions that had been very well received. He paid tribute to him with the words: “Alfred Flechtheim was more than an art dealer; in the time in which he lived, it was an honour for us to see that he was a man who always stood in the front line, a person known to the whole world, about whom the whole world talked.”


Further reading
In 1987, to mark the 50th anniversary of Alfred Flechtheim’s death, a first monographic appraisal of his work by the Kunstmuseum Düsseldorf, now the Museum Kunstpalast, was shown at an exhibition in Düsseldorf and the Westfälisches Landesmuseum für Kunst und Kulturgeschichte in Münster. The first Flechtheim biography by the historian Ottfried Dascher which includes many new details continues in this vein. Due to provenance research carried out by art museums over the past few years and to current public interest – also triggered by requests for information from various museums by his heirs and their representatives – a more complex picture of Alfred Flechtheim’s legacy in the field of culture and the museum landscape in Europe has now been revealed thanks to new findings. To coincide with this project, the Coordinating Office in Magdeburg is publishing contributions from a workshop on Alfred Flechtheim, held earlier on 25 October 2011 at the Institut für Zeitgeschichte, Munich, entitled ‘Kunstraub und Restitution’ / ‘Looted Art and Restitution’. The volume was supplemented by further contributions by provenance researchers and includes cases studies from participating museums.