Is Using A Wireless Router Copyright Infringement? Or a Defense? (UPDATED) 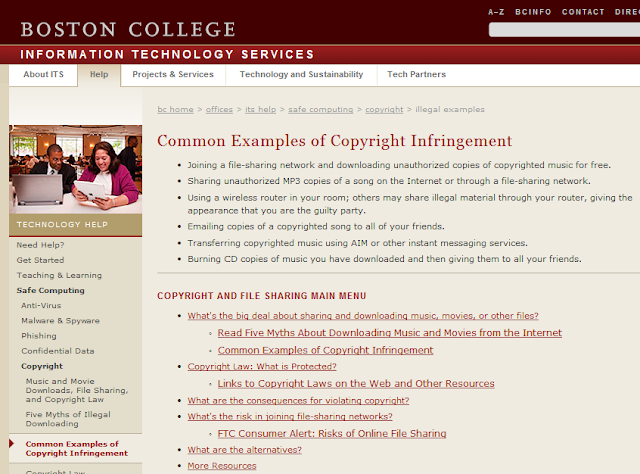 
•Joining a file-sharing network and downloading unauthorized copies of copyrighted music for free.

•Sharing unauthorized MP3 copies of a song on the Internet or through a file-sharing network.

•Using a wireless router in your room; others may share illegal material through your router, giving the appearance that you are the guilty party.

•Emailing copies of a copyrighted song to all of your friends.

•Burning CD copies of music you have downloaded and then giving them to all your friends.


This is the first time I have heard that colleges and universities are teaching America's youth that using a wireless router constituted copyright infringement, can anyone educate me as to where this came from?

I have excerpted below the three federal opinions mentioning wireless routers, in each, having a wireless router was a potential defense to copyright infringement.

Therefore, given the evidence that there is no wireless router involved in this case, the Court excludes Kim's opinion that it is possible that someone could have spoofed or hijacked Defendant's Internet account through an unprotected wireless access point. Similarly, because Kim explicitly testified that this case does not involve any “black IP space,” or any “temporarily unused” IP space (Kim Dep. 110-11), he is not permitted to opine at trial that hijacking of black IP space or temporary unused IP is a possible explanation in this case.


In connection with a motion to vacate a default judgment, a defendant must present more than conclusory denials when attempting to show the existence of a meritorious defense. See Enron Oil Corp., 10 F.3d at 98. “The test of such a defense is measured not by whether there is a likelihood that it will carry the day, but whether the evidence submitted, if proven at trial, would constitute a complete defense.” Id (citations omitted) (emphasis added). To set aside a default, the movant must “support its general denials with some underlying facts.” Sony Corp., 800 F.2d at 320-21.

Here, defendant has failed to make an adequate showing of a meritorious defense. Despite this circuit's strong preference for resolving cases on the merits, see Traguth v. Zuck, 710 F.2d 90, 94 (2d Cir.1983), I find that defendant has made no statement of facts which, if proven at trial, would constitute a complete defense to plaintiffs' claims. Defendant has offered little more than conclusory denials of the alleged infringement. While defendant claims that he uses an unsecured wireless router at his residence, which could have been used by an outside party to commit the alleged infringing activity,FN7 this does not constitute a complete defense. Furthermore, plaintiffs have identified the screen name that was used to commit the alleged infringing activity as “jAcKiEecUddlEsSs@KaZaA.” ( See Gutierrez Decl. ¶ 18.) Defendant admits that he has a daughter named Jacqueline. ( See Tr. at 16.) This is unlikely to be a coincidence. I therefore find that defendant has not established a complete defense to plaintiffs' allegations.

From  Motown Record Co., LP v. DePietro 2007 WL 576284, 2 (E.D.Pa.,2007)
Defendant's refusal to cooperate with Plaintiffs has persisted throughout the discovery process. Defendant initially refused to provide any written discovery to Plaintiffs.FN14 On at least two different occasions, Defendant refused to answer questions related to the case by asserting her Fifth Amendment privilege against self-incrimination, even though no criminal investigation or charges were pending against her.FN15 These refusals to cooperate forced Plaintiffs to seek Orders from this Court compelling Plaintiff to provide written discovery and to be deposed.FN16 Thereafter, Plaintiff was deposed a second time and submitted responses to previously issued interrogatories. During discovery, Defendant acknowledged that she was the only person who had access to her computer,FN17 that her live-in boyfriend was the only other person in her apartment for any extended period of time, FN18 and that she never used a wireless router or wireless service to connect to the Internet.FN19More on fair use guidelines here.

UPDATE
Techdirt attracts over 170 comments on the story here.   Many commenters say that the BC policy is a poorly-worded security warning and that people should secure their routers to avoid unauthorized use.