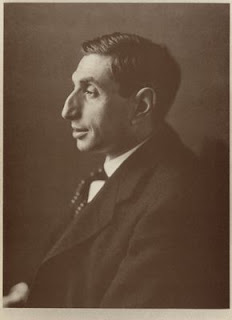 The panel, called "Wrestling the Dead Hand of History: Perspectives on a Proposed State Department Commission on Nazi Looted Art," and features Jen Kreder with Ambassadors Kennedy and Eizenstat, Dr. Lucille A. Roussin (left) of Cardozo School of Law, and New York-based attorney Charles A. Goldstein.

I support the US State Department's proposal to set up a U.S. Commission to return artworks in US museums that were stolen from Jews and never returned.

If the US doesn't take this measure and force our museums to start telling the truth about where the art in their collections come from, we can hardly expect other countries such as Russia, Poland and Austria to return all of the arts stolen from Jews by the Nazis.

Above at top is a photograph of Alfred Flechtheim, the leading contemporary art dealer in the Weimar Republic and reviled in Nazi propaganda as the "Artjew Flechtheim".   You will find practically nothing written about Flechtheim in the English language - the U.S. museums who have the artworks stolen from his Berlin and Dusseldorf galleries would like to write Flechtheim out of history.  Below, Flechtheim's portrait by Otto Dix.  Dix's style shown below was known as "Neue Sachtlicheit" (New Objectivity). 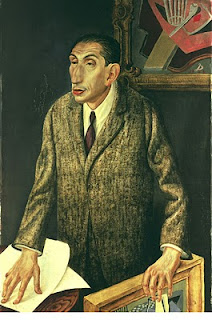