Sculpture, History, Copyright Infringement and Fair Use of the Korean War Veteran's Memorial 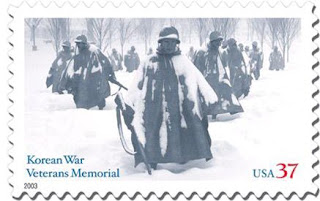 In Gaylord v. United States, February 25, 2010, the U.S. Court of Appeals for the Federal Circuit upheld a sculptor's right to sue the U.S. government for copyright infringement for unauthorized use of the sculptures on a postage stamp.  The Federal Circuit reversed a decision of the Federal Court of Claims that found that the U.S. government use of Gaylord's sculptures that were made for the Korean War Veteran's Memorial were "fair use".   You can visit the decision here and I recommend that you do so even if just to view the images appearing in the court's opinion.   The Court inserted the images in the body of the text of the opinion in color.  Despite the low image quality, inclusion of the images really gives the reader an opportunity to compare the images and really see what the court is talking about, which is a terrific development in technology and an outgrowth of federal courts going digital.  It is annoying to read a 20-page decision comparing images that one can't see, and we can hope that those days will soon be past.
The Gaylord case involves the United States licensing a photograph of a sculpture to use the photograph on a postage stamp.   Although the photograph was properly registered as a derivative work of Gaylord's sculpture, the U.S.P.S. neglected to license the right to use the underlying sculpture itself.
So the photographer got paid $1,500 for the photograph of the Memorial (snowy scene, great camera angle).
The Federal Circuit conducted a fair use analysis that I found problematic, and concluded that the U.S. government's use of the underlying sculptural work was not fair.
While I support a sculptor's right to commercialize his images, stopping the U.S.P.S. from issuing a stamp featuring the Korean War Veteran's Memorial without paying the sculptor again - or each time - gives the sculptor a monopoly on a work that he has made an icon of a tragic historical moment at taxpayer expense. U.S. government works of this type should be in the public domain, and the government contracting process should be fixed to ensure that taxpayers don't get soaked every time the government wishes to publish or sell images of a property like a monument symbolizing the war dead.  The sculptor dotted his copyright ps and qs, but as a matter of public policy, any of us should be able to go to any public park, take photographs and sell images of what we see, at least permanent installations.   I would thin the copyright out further to subtract all non-copyrightable elements:  government-issue ponchos, helmets, etc., apply the scenes-a-fair doctrine (there are only so many ways to depict the Korean War Veteran's Memorial).
It was not smart to commission a monument that is not a work-for-hire, or at least that permitted the government a non-exclusive license.  But the Federal Circuit didn't get the "purpose" of the work right.  If a Korean Vet's group wanted to print t-shirts with an image of the Memorial for their friends, loved ones, fundraising purposes, etc., I'd say those are all fair uses, too.  The image is of the Memorial, not the sculptures.
I have a problem, too, with giving an AP photographer a monopoly over a Presidential candidate's image -- it is too uncomfortably close to handing out a monopoly on historical facts.