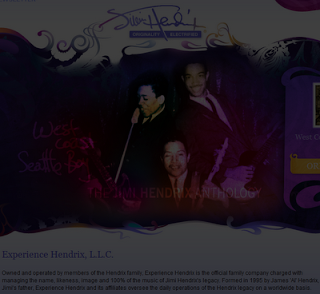 In Experience Hendrix, LLC v. Hendrixlicensing.com, (W.D.Wa. Feb. 8, 2011 (Zilly, J.), a federal judge in the Western District of Washington struck down as unconstitutional a Washington State law that attempted to grant dead celebrities, including Jimi Hendrix, a posthumous right of publicity.

I have previously discussed rights of publicity (also known as rights of privacy) here and here and here.
Jimi Hendrix died in New York. New York does not grant a posthumous right of publicity. That has created major litigation in the past over, for example, Marilyn Monroe's image and name. Hendrix was not a Washington State domiciliary, so granting his estate a right of publicity would effectively have created a right that conflicted with New York law.

The court engaged in a careful choice of law (conflicts of law) analyis. It used the principle of "depecage" (I don't have a circonflexe on this blog).  "Depecage" means parsing out the law of each juridisction that may govern an issue in a case.  Courts rarely go this deeply and thoughtfully into choice of law analyses, so the opinion is noteworthy in that aspect.

The decision is also noteworthy in that it carefully unbundles the various rights that may be caught up in licensing someone else's name and image including trademark and copyright.

For example, if you have a photograph of Jimi Hendrix, it may be "nominative fair use" to use Hendrix's name to identify the photograph, even if someone else owns the Hendrix trademark.

The estate of Elvis, who died in Tennessee, has the right to exploit his name and image under Tennessee law.

Be careful before paying a lot of money for a license to ensure that the rights really exist.   Similarly, when accused of infringement, take a careful look at the underlying intellectual property claims.
Jim Hendrix and Rights of Publicity for Dead Celebrities: Experience Hendrix v Hendrixlicensing.com

I think Jimi Hendrix died in London, not New York, but he might have had his primary US residence in NY at the time of his death. So the questions of jurisdiction between Washington and NY might still apply.

Yes Jimi was in London at the time of his death. But long-standing litigation going back to 1968 when the estate was first awarded established that he was domiciled in NY. These 2008 amendments would have allowed the WA law to apply "regardless of domicile" in contravention of the rule in 48 other states. It was this that the court found the Constitution could not abide.