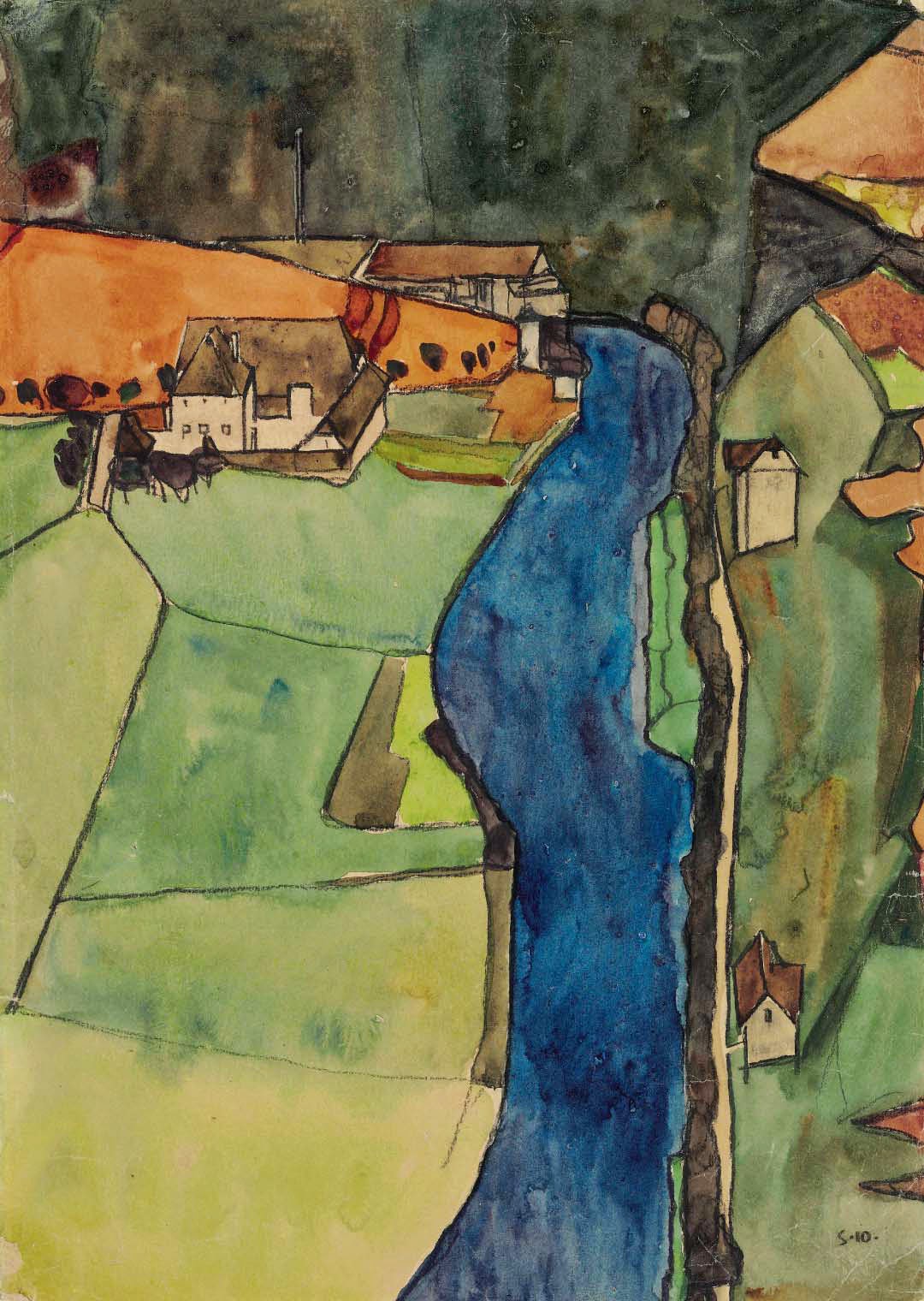 Egon Schiele's Town on the Blue River - Krumau (1910)
Dunnington partner Raymond J. Dowd has been selected to speak at “Murder, Mystery & Masterpieces: The Ethical Implications of World War II Stolen Art,” to be presented by the Brandeis Association and the Queens Women’s Bar Association. The event will take place the Queens County Bar Association (90-35 148th Street, Jamaica, NY) tonight at 6:00 p.m., the date being chosen to coincide with the 76th anniversary of Kristallnacht (November 9-10, 1938). A light kosher supper will precede the event, beginning at 5:30 p.m.
The Nazis are infamous for their rampant theft of artworks belonging to Jewish people and others deemed undesirable. Public awareness of this pillaging has only grown in recent years with the release of films such as The Monuments Men (2014) and The Rape of Europa (2006). Additionally, newly opened archives in the United States and Europe have contributed to an ever-increasing number of claims brought by the Nazis’ victims and their descendants. As a result, the body of case law pertaining to such matters is constantly growing and evolving.
Mr. Dowd recently represented the heirs of Holocaust victim Fritz Grunbaum, who was killed at Dachau in 1941, in coming to a restitution settlement agreement concerning the painting Town on the Blue River (Stadt am blauen Fluss – Krumau), painted by Egon Schiele in 1910. The watercolor landscape was among eighty-one works of art by Schiele seized from Mr. Grunbaum’s apartment in Vienna by the Gestapo in March 1938. In 1998, a spotlight was shone upon Mr. Grunbaum’s fate and that of his art when New York District Attorney Robert Morgenthau confiscated the painting Dead City III from New York City’s Museum of Modern Art, where it was on loan from Austria. Because the exhibition was immune from seizure as a result of an international treaty, the piece was ultimately returned; however, the incident was key in propelling the movement to restore Nazi-looted artworks to their rightful owners. Town on the Blue River was auctioned at Christie’s at their Impressionist and Modern Evening Sale on November 5, 2014, where it reached a record high of $2,965,000. The proceeds will be shared by Mr. Grunbaum’s heirs and those of Ilona Gerstel, in whose possession the piece spent nearly a half-century.

Joining Mr. Dowd in this discussion of art stolen during World War II and the legal and ethical complications in which the restitution of such pieces is mired will be Professor John Q. Barrett of St. John’s University School of Law, who also serves on the Expert Advisory Committee of the International Nuremberg Principles Academy. Following presentation of recent happenings relating to Holocaust-era assets and discussion of their longer-term impact, Mr. Dowd and Professor Barrett will welcome questions from the audience.
The event is free. To register, please click here.
About the Brandeis Association The Brandeis Association was established in 1969 as a Not for Profit Corporation. The stated purpose of the Bar association, as set forth in both the Brandeis Constitution and Articles of Incorporation, is to encourage friendship and culture among our members, to foster respect for law and legal institutions and to vigorously assert its interest in justice and fair play in the County of Queens and in the City and State of New York. All members of the Judiciary, Lawyers, Court personnel and others who support the Jewish faith and the U.S. Constitution are eligible for membership.
About Dunnington partner Raymond J. Dowd Mr. Dowd’s practice focuses on litigation in federal and state trial and appellate courts, arbitration and mediation for cases involving art law, copyrights, trademarks, cybersquatting, privacy, trusts and decedents’ estates, licensing, corporate and real estate transactions. He lectures frequently on copyright and art-related topics and has presented in many venues, including at the 2009 Prague Conference on Holocaust-Era Assets, where he served on an expert panel, the Jewish Museum in Berlin, Yad Vashem in Jerusalem, the Pennsylvania Academy of the Fine Arts, the San Francisco War Memorial, and the U.S. District Court for the District of Columbia. In 2007, he co-founded the Art Litigation and Dispute Resolution Institute at New York County Lawyers’ Association. Mr. Dowd authors Copyright Litigation Handbook (West 7th Ed. 2013-2014)(updated annually). Currently Mr. Dowd serves on the Board of Directors of the Federal Bar Association, having earlier held the positions of President of the Southern District of New York Chapter (2006-2008) and general counsel of the national organization, and as President of the Network of Bar Leaders.
Dunnington, Bartholow & Miller LLP was selected as a 2014 Top Ranked Law Firm for Intellectual Property by Corporate Counsel/ALM/The American Lawyer. Dunnington is a full-service law firm providing corporate, litigation, intellectual property, real estate, taxation and estate planning services for an international clientele. Find out more at www.dunnington.com.

Attorney advertising. Past results do not guarantee future outcomes