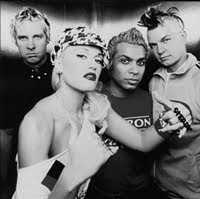 No Doubt Group Photo - from Nodoubt.com 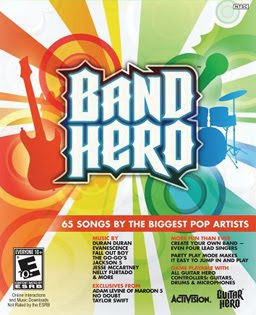 Band Hero - Courtesy Wikipedia
The law governing the use of a person's image for purposes of trade or advertising is called a "right of publicity" or "right of privacy".   It is a body of law governed by state, not federal law.   Celebrity-obssessed states like California and New York have statutes governing this right.  Other states recognize the right under common law.
No Doubt claimed that the video game Band Hero exceeded the scope of a license agreement and permitted players without authorization to show band members playing individually (rather than as a group) and to create in-game avatars by manipulating and distorting the images of the band members.   So the question is: does the Copyright Act preempt state laws of publicity (use of name and likeness), breach of contract, and unfair competition?  "Preemption" in this context means completely overriding the state law.  Copyright is one of the rare areas of law in which the "complete preemption" doctrine applies.
Backgrouns: Actors in a film lose the publicity right
When an actor appears in a film, he or she loses the right of publicity, which is said to be "preempted" by the Copyright Act.   So if an actor is stiffed on a fee for appearing in a film, there is no action for copyright infringement or any alternative theories such as "misappropriation" of the actor's image.  The actor must rely on state contract law and must pursue the person who broke the contract.  The logic is that the actor's performance is a "copyrightable work" that was captured by a film-maker "author".
No Doubt v. Activision Publishing, Inc., 2010 WL 1387988 (C.D. Cal. Jan. 14, 2010) discusses the situation of actors:
Notably, the actors' “performances in the film were recorded with their active participation and consent.” Id. at 1920 n. 5, 58 Cal.Rptr.2d 645. But after a pay dispute, the actors filed a claim for misappropriation of likeness and violation of their rights of publicity. Id. at 1915, 58 Cal.Rptr.2d 645.

The court held that the actors' claim fell within copyright subject matter. Id. at 1920, 58 Cal.Rptr.2d 645. The court reasoned that once the performances were put on film with the actors' consent, they were “fixed in a tangible medium of expression” that fulfilled the requirements of section 102 of the Copyright Act. Id. at 1919, 58 Cal.Rptr.2d 645. The actors' performances were part of the copyrighted material, and the actors' likenesses could not be detached from the copyrighted performances that were contained in the film. The court concluded that the actors' case “crumbles in the face of one obvious fact: their individual performances in the film ... were copyrightable .” Id. at 1919, 58 Cal.Rptr.2d 645. As a result, the court held that their claims were preempted: “A claim asserted to prevent nothing more than the reproduction, performance, distribution, or display of a dramatic performance captured on film is subsumed by copyright law and preempted.” Id. at 1924, 58 Cal.Rptr.2d 645.
No Doubt v. Activision Publishing, Inc., 2010 WL 1387988 (C.D. Cal. Jan. 14, 2010) on the other hand, dealt with the issue of whether the rock band No Doubt could sue under California law for right of publicity and unfair competition for unauthorized manipulation and distortion of their names and likenesses.


A bit of procedural history is in order.  In my Copyright Litigation Handbook (West 4th Ed. 2009), Chapter 10 is titled "Removal from State Court and Preemption.   Grossly simplified: if a complaint does not state a "federal question" on its face, it belongs in state court.  If a "federal question" appears on the face of a complaint, it can be automatically bounced to federal court by filing a notice of removal.  28 USC 1441  If the person whose case is removed to federal court is unhappy and has grounds to do so, he or she must then make a motion to remand.  I quote:
“[A]ny civil action brought in a State court of which the district courts of the United States have original jurisdiction, may be removed by the defendant or the defendants, to the district court of the United States.” 28 U.S.C. § 1441(a). If the federal courts lack subject matter over the action, the case must be remanded to the state court from which it was removed. 28 U.S.C. § 1447(c).

Very few people on the face of the earth are fascinated by this pingpong between federal and state courts because the decisions rarely make it to the appellate level where law professors and law reviews concentrate their energies.   But as a working litigator, I find an understanding of this game of pingpong to be crucial for strategic reasons at the beginning of a litigation.
No Doubt v. Activision Publishing, Inc., was filed in state court and removed to federal court.  So the question before the No Doubt court was whether or not to bounce the case back to state court ("remand").
The court decided that the contract, right of publicity and unfair competition were not preempted, and remanded the case back to a California state court.
The court's reasoning below:
We must first determine whether the “subject matter” of the state law claim falls within the subject matter of copyright as described in 17 U.S.C. §§ 102 and 103. Second, assuming that it does, we must determine whether the rights asserted under state law are equivalent to the rights contained in 17 U.S.C. § 106, which articulates the exclusive rights of copyright holders.Laws, 448 F.3d at 1137-38.

First, Plaintiffs' rights do not fall within the subject matter of copyright. In this case, in contrast to Laws and Fleet, the object that is “fixed in a tangible medium of expression” is the physical likeness and persona of the Plaintiffs. Name, likeness, and persona are not copyrightable subject matter, both under the Copyright Act and the Copyright Clause of the Constitution, because a name, likeness, or persona is not a work of “authorship” entitled to copyright protection. See Downing, 265 F.3d at 1003-05; see also Toney v. L'Oreal USA, Inc., 406 F.3d 905 (7th Cir.2005) (holding no preemption where photo model asserted right of publicity claim against photo copyright holder).


It is true that Defendant's videogame is a work of authorship entitled to copyright protection, see Midway Mfg. Co. v. Arctic Intern., Inc., 704 F.2d 1009, 1012 (7th Cir.1983), and that the musicians' songs incorporated into Defendant's videogame are copyrightable. See 17 U.S.C. §§ 102(a)(2), (7) (listing “musical works” and “sound recordings” as copyrightable works of authorship). Further, live musical recordings that are captured on videotape are also copyrightable. See, e.g., Armstrong v. Eagle Rock Ent., Inc., 655 F.Supp.2d 779, 2009 WL 2923173, at *7-8 (E.D.Mich.2009) (musician's publicity and appropriation claims against music video distributor preempted by Copyright Act where case involved live musical performance recorded on videotape); see also 17 U.S.C. § 102(a)(6) (listing “motion pictures and other audiovisual works” as copyrightable works of authorship). Thus, if Plaintiff were suing on the basis of Defendant's misuse of Plaintiff's songs or videotaped musical performance, its claims would be preempted by the Copyright Act. See, e.g., Laws, 448 F.3d at 1138-43. The same result would occur if Plaintiff were claiming a right in the entire videogame as infringing a similar work of Plaintiff's own authorship. See, e.g., M. Kramer Mfg. Co., Inc. v. Andrews, 783 F.2d 421, 445-46 (4th Cir.1986).

This case is exactly what the Laws court had in mind when it suggested that Debra Laws might have a valid cause of action against Elektra Records (with whom she had entered into a recording contract), but not against Sony Records (which had obtained from Elektra licenses to use Laws's songs). The court clearly counseled that artists and entertainers should proceed exactly as Plaintiff has proceeded in this case:

If Laws wished to retain control of her performance, she should (and may) have either retained the copyright or contracted with the copyright holder, Elektra, to give her control over its licensing. Laws, 448 F.3d at 1145. The court added: But if Elektra licensed “Very Special” to Sony in violation of its contract with Laws, her remedy sounds in contract against Elektra, not in tort against Sony. Id. at 1144. Laws's right-of-publicity claims against the copyright licensee were preempted by the Copyright Act; but Laws's claims against the party with whom she contracted would not be preempted.

Here, Plaintiff contracted with the videogame's copyright holder (that is, Defendant) so that the copyright holder would only engage in certain activities. Plaintiff carefully controlled the rights it was allowing Defendant to incorporate into the videogame. Subsequently, Defendant engaged in certain other activities that were not contractually permissible. Thus Plaintiff has a valid breach of contract cause of action. Further, Defendant's alleged breach of contract involved Defendant's impermissible use of Plaintiff name, image, and likeness. Thus Plaintiff also has a valid tort cause of action for violation of Plaintiff's right of publicity. Accord Facenda v. N.F.L. Films, Inc., 542 F.3d 1007, 1031-32 (3d Cir.2008) (sportscaster's breach of contract and right of publicity claims not preempted by copyright where sportcaster's contract allowed defendant to use sportscaster's voice recordings in context of sports broadcasts, not in context of television advertisements for videogame).

In short, the rights asserted by Plaintiff are not copyrightable, see Downing, 265 F.3d 1003-04, and Plaintiff did not agree to Defendant's incorporation of Plaintiff's name, likeness, or image into Defendant's copyrighted work in the manner that Defendant did so, cf. Fleet, 50 Cal.App.4th at 1919, 58 Cal.Rptr.2d 645. Accordingly, Plaintiff's tort and contract claims are not preempted by the Copyright Act.
Posted by Ray Dowd at Sunday, April 11, 2010

So, what is the upshot? I conclude that Plaintiff's damages and remedies are potentially greater in state ct when compared to those available in Fed ct under the Copyright Act?