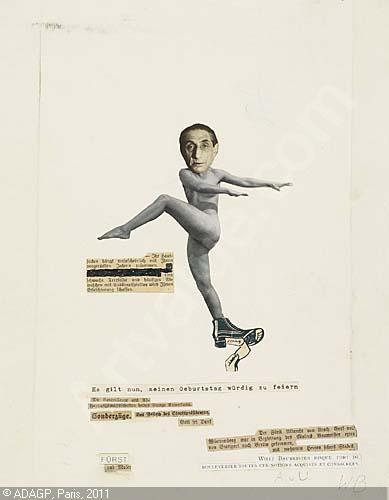 Excellent article by William Cohan on MoMA's concealment of the provenances of artworks in Alfred Flechtheim's 1933 inventory in December 2011 Art News here.  Alfred Flechtheim, depicted above by Willi Baumeister, was the most prominent contemporary art dealer of the Weimar Republic.  Scandal erupted over claims by the heirs of George Grosz that Grosz had left artworks now at MoMA in the hands of Flechtheim, who in turn was "Aryanized" by a Nazi from Dusseldorf named Alexander Voemel in 1933.

Cohan's article points out how MoMA has tried to erase Flechtheim from art history.

The MoMA, like a number of other U.S. museums, has used statutes of limitations to hold onto stolen art, even though museum administrators and trustees had concealed information that would permit heirs to make claims for decades.

MoMA Executive Glenn Lowry misled the Grosz heirs by claiming that he had no authority to refuse their claims to the three artworks in question and had not refused their claims to the artworks.    MoMA, represented by the Proskauer law firm, then changed its position, claiming that Lowry actually did have the authority to refuse the claims and that he'd actually refused the claims much earlier than he had by simply not returning the artworks.

MoMA was successful in convincing federal judges that the "refusal" had triggered New York's three year statute of limitations.

It should shock the conscience of Americans that museums can use statutes of limitations to hold onto stolen art, the acquisition of which has been subsidized by U.S. taxpayers.    Rich people should not be able to avoid paying taxes by taken art stolen from Jews in the Holocaust and putting it into U.S. museums where it is hidden from scrutiny - often for decades.

It is too simple to say that Voemel was a Nazi. He was a member of the party yes. But he was also the assistant of Flechtheim and he took care of the collection when Felchtheim left Germany.
Things have to be proved first.
Best regards,
JM