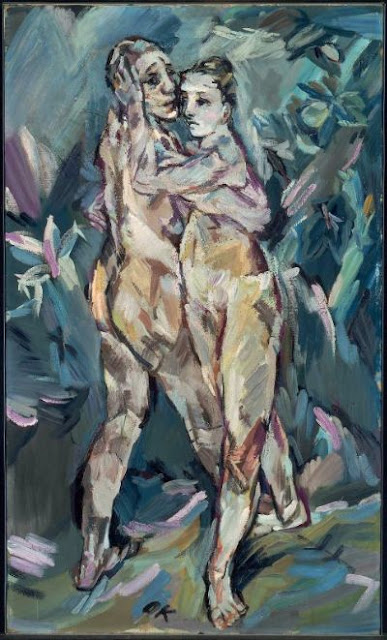 Stolen Kokoschka at MFA Boston: Court Rules Claimants Too Late for Justice
The Boston Globe, in a piece here by veteran reporter Geoff Edgers who has reported on many Nazi art looting scandals involving the Museum of Fine Arts Boston, reports in a rather soft and indirect way that the museum is continuing to conceal its research on how a work by Oskar Kokoschka got from the Jewish Viennese dentist Oskar Reichel in February 1939 to the art dealer Otto Kallir.   Earlier coverage of the case here.

Otto Kallir was profiled in an article Dealer with the Devil by the New York Observer here.

In February 1939, Jews had declared their property to the Nazi Reich.  Vienna was in the grips of Adolph Eichmann, who was systematically despoiling them of all property.

The Boston Globe article states as follows:
She [Reed] does defend the MFA, which she says shares the results of all its Nazi-era provenance research on its website, on gallery labels, and in gallery talks. The only exception is when there is a legal matter that includes correspondence that is privileged.

Her understated approach is typical of Reed. She wants the evidence from her research to speak for itself without telling her boss, MFA deputy director Katherine Getchell, how to respond.
That makes perfect sense to Getchell.

“Her job is not to be a policymaker or decision maker,’’ said Getchell. “We want her focused on research and analysis and looking at the different options.’’

But the Boston Globe has glossed the point.  Victoria Reed has presented no evidence, only the most conclusory "results" of her alleged research.  The Museum of Fine Arts website states as follows here:

Provenance Research
Following this March 2007 claim [to the Kokoschka], the MFA thoroughly reviewed the claim to Two Nudes (Lovers) in accordance with its own Acquisitions Policy as well as the guidelines set forth by the American Association of Museums (AAM), the Association of Art Museum Directors (AAMD), and the Washington Principles of 1998 on Nazi-Confiscated Art. The Museum is committed to determining, on an ongoing basis, whether any work of art in its collection has ever been stolen, confiscated, looted, or otherwise unlawfully appropriated as a result of Nazi persecution without subsequent restitution. A leader in provenance research, the MFA makes ownership information available to the public through its website, mfa.org. During the past decade, the Museum has restituted a number of works of art to their rightful owners based on provenance research.

None of this research has been made public.  Instead, the Museum has published a five paragraph summary of the 'results' of its alleged research.  A sample of this conclusory "research" follows below:

By 1924, Reichel had developed a business relationship with Otto Kallir (b. 1894 - d. 1978), a Jewish art dealer who opened the Neue Galerie in Vienna in 1923. Reichel consigned Two Nudes (Lovers), along with other paintings by Kokoschka, for sale through Kallir in the 1920s and 1930s. In 1938, Kallir fled Vienna and turned the Neue Galerie over to his non-Jewish secretary. He opened a new gallery, the Galerie St. Etienne, in Paris. In February 1939, Reichel transferred ownership of five Kokoschka paintings—including Two Nudes (Lovers) —to Kallir, who exhibited them in his Paris gallery that spring. Later that year, Kallir emigrated to New York and opened a branch of the Galerie St. Etienne there. He exhibited Two Nudes (Lovers) frequently between 1940 and 1945, both in his New York gallery and in traveling exhibitions throughout the United States. From New York, Kallir sent money for the five Kokoschka paintings to Oskar Reichel’s two sons, Raimund and Hans, with whom he was in communication; they were living in South America and the United States, respectively.

Oskar Reichel was a Jew in Adolph Eichmann's Vienna.  His assets were logged and registered with the Nazis.  Nazi law prohibited Jews from making any transfers, and if any transfers were authorized, all of the proceeds went to the Reich.  How on earth could Reichel have tranferred ownership these assets to Kallir?    And even if he did, the 1946 Nullification Act, which voided transactions in property of Nazi persecutees, should have applied.

Why has the MFA's researcher Victoria Reed failed to present her scholarship for peer review?  Historians are ethically mandated to do so.   Here is an excerpt from the American Historical Association's Statement on Professional Conduct

Professional integrity in the practice of history requires awareness of one's own biases and a readiness to follow sound method and analysis wherever they may lead.Historians should document their findings and be prepared to make available their sources, evidence, and data, including any documentation they develop through interviews. Historians should not misrepresent their sources. They should report their findings as accurately as possible and not omit evidence that runs counter to their own interpretation. They should not commit plagiarism. They should oppose false or erroneous use of evidence, along with any efforts to ignore or conceal such false or erroneous use.
Historians should acknowledge the receipt of any financial support, sponsorship, or unique privileges (including special access to research material) related to their research, especially when such privileges could bias their research findings. They should always acknowledge assistance received from colleagues, students, research assistants, and others, and give due credit to collaborators.

Historians should work to preserve the historical record, and support institutions that perform this crucial service. Historians favor free, open, equal, and nondiscriminatory access to archival, library, and museum collections wherever possible. They should be careful to avoid any actions that might prejudice access for future historians. Although they recognize the legitimacy of restricting access to some sources for national security, proprietary, and privacy reasons, they have a professional interest in opposing unnecessary restrictions whenever appropriate.

For another great example of museums professing to publish research, but in reality concealing it, please check out William D. Cohan's MoMA's Problematic Provenances in this month's ArtNews here