http://www.austinchronicle.com/
In Kleinman v. City of San Marcos, --- F.3d ----, 2010 WL 447894 (5th Cir. 2010 Feb. 10, 2010), the Fifth Circuit decided the question of whether Ralph the Cactus Planter, a junked Oldsmobile '88 filled with dirt, planted with cactus and covered with paintings by artists commissioned to include the message "make love not war" was protected by the First Amendment or a work covered by the Visual Artists Rights Act ("VARA").
The Fifth Circuit looked to the Second Circuit's analysis in Bery v. Bery, 97 F.3d 689 (2d Cir. 1996) and adopted Bery's distinction between works of fine art and works of decorative art.   The court found the Junked Vehicle statute to survive intermediate scrutiny under a First Amendment analysis.
The court found that VARA did not apply, since Ralph was a distinctive corporate symbol of the Planet K business (novelty shops).  VARA excludes "any merchandising item or advertising, promotional, descriptive, covering, packaging material or container."    The court upheld the district court's finding that Ralph was "promotional material" and thus VARA did not apply.
In the court's words:
Irrespective of the intentions of its creators or Planet K's owner, the car-planter is a utilitarian device, an advertisement, and ultimately a “junked vehicle.” These qualities objectively dominate any expressive component of its exterior painting. Appellants concede that the car falls within the definition of the San Marcos ordinance. Moreover, the Eighth Circuit, confronted before Hurley with a wrecked auto that was displayed streetside to remind the public how the owner's son had been killed, had no difficulty finding that the auto's removal under a junked-vehicle ordinance survived intermediate scrutiny. Davis v. Norman, 555 F.2d 189 (8th Cir.1977). When the “expressive” component of an object, considered objectively in light of its function and utility, is at best secondary, the public display of the object is conduct subject to reasonable state regulation. We therefore pretermit “recourse to principles of aesthetics.”

The decision is problematic for artists and lacking in copyright analysis.   A chassis of an car that has been almost completely transformed is not at all a "utilitarian object". 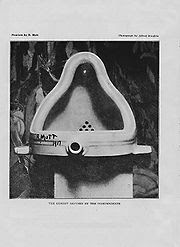 Marcel Duchamp Fountain, 1917 photo Alfred Steiglitz
(courtesy Wikipedia).
The artwork would appear to be a sculptural work and have sufficient copyrightable elements to be protected as such under federal law.  Two painters were commissioned to paint the work.  The court's VARA analysis seems problematic, compare the First Circuit's thoughtful analysis in Buchel v. Mass MoCA, discussed here.   Query also how narrowly tailored the junk vehicle statute really is.
Why put a fence around Ralph?  Can the state really put a fence around every art installation that contains part of an old car?
Posted by Ray Dowd at Friday, February 12, 2010