Patry's Moral Panics and the Copyright Wars: Strangled In Copyright, US Devoured By Korea

Professor William Patry, copyright's most prolific scholar and a bit of a folk devil himself, has come out with a new book that burns with the ambition of making us rethink copyright from the ground up. According to Patry, countries like Korea and Japan are far ahead of the US in technological innovation and embrace of the internet to create lucrative consumer-driven markets for copyrighted content.

If you want to know why your DVD player doesn't have a "record" button, Patry provides the best, most entertaining, and lively explanation I've ever seen.

Patry's erudition and lively writing style make for a brisk and entertaining read. His examples are interesting and compelling -and his discourses on metaphor are quite brilliant. Patry is at his best in cheerfully skewering corporate oligopolists who have successfully lobbied for laws that destroy technical innovation.

Patry plays Marc Antony to Jack Valenti's Caesar: Valenti was the head of the Motion Picture Association of America and a genius lobbyist. Valenti branded consumers as "pirates" and "thieves" for doing things like skipping commercials and mustered up populist outrage in Congress in order to grab cash and control over content for his oligopolist clients. Patry attacks these "folk devils" invented by Valenti and the "moral panics" he created and then cashed in on. Patry shows pretty convincingly that Hollywood and the RIAA have thoroughly misbehaved. 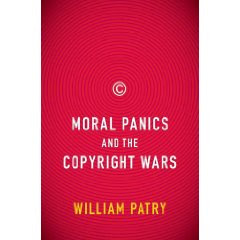 If you are interested in the debates over the past, present and future of copyright law, this is a terrific, unabashedly partisan book. Although Patry says we need to rethink copyright from the ground up as a privilege that is a creature of the legislature and a servant of the public good, I didn't find any concrete prescriptions for doing so. Patry is Senior Counsel to Google, but his book and the blog discussing his book have prominent disclaimers warning against attributing Patry's views to Google. But Patry's views are Google-friendly, to say the least and it would be pretty surprising if Google did not wholeheartedly embrace his views.

One concrete proposal that Patry supports is having the Obama Administration back a broadband initiative that would increase access and speed for consumers - essentially building a national online highway.

To bring home his point, Patry points to Korea and Japan and cites a study showing that "at this rate, it will take the United States more than 100 years to catch up with current Internet speeds in Japan".

This is after an entire book full of Patry blasting copyright owners for using dubious statistics, histrionic metaphors and "folk devils". Valenti would have liked Patry's conjuring this Asian menace - it's the same menace Valenti relied on.

Whether you agree or disagree with Patry, it's a thought-provoking book and likely to be influential with the U.S. judiciary. Despite the disclaimers, it's likely to be taken as a road map for lobbying Washington by technology companies currently shut out of lucrative markets by the content oligopolies.

Patry has created a blog to discuss his book found here. Hopefully this new blog will be a home to the lively and spirited debate that Patry is famous for.

Hi Ray, thanks for the review. I take strong exception to the accusation that I am conjuring up an Asian menace. To the contrary, I am praising South Korea and Japan as models for the U.S. to aspire to. And it is not a zero sum game either; we could have the same fast service as they do, without injuring them or vice versa. Valenti's discussion of Japan was the opposite of mine: Japan for Valenti was a menace, a place that was injuring U.S. copyright owners in a zero sum game.

I also dispute that the book is partisan. I go to pains to point out that unlike some Copyleft, people I do not think the copyright industries are evil or that copyright is evil or needs to be repealed. I think copyright has a very important role to play, if it is at an effective level. In my view it is not. The criticism of copyright owners in the book, which indeed is extensive, is about their failure to be effective businesspeople, their failure to satisfy consumer demand and to instead their thwarting it. I say I want the copyright industries to succeed, and I do. I put my money where my mouth is by supporting them through buying their products. The goal of my criticism is not to tear them down but to reorient their behavior toward consumers and stop using copyright law to deprive consumers of legitimate product. That is a real concrete proposal and I give concrete examples of how they have failed to do so.

The policy prescriptions are few, because the book is about how we talk and think about copyright as a system, not how to make specific changes. Had I made a list of concrete proposals and discussed them at length, that's all people would have focused on.

I hope this clarifies things, constructively.