Are SOPA and PIPA Necessary To Shut Down Rogue Websites? 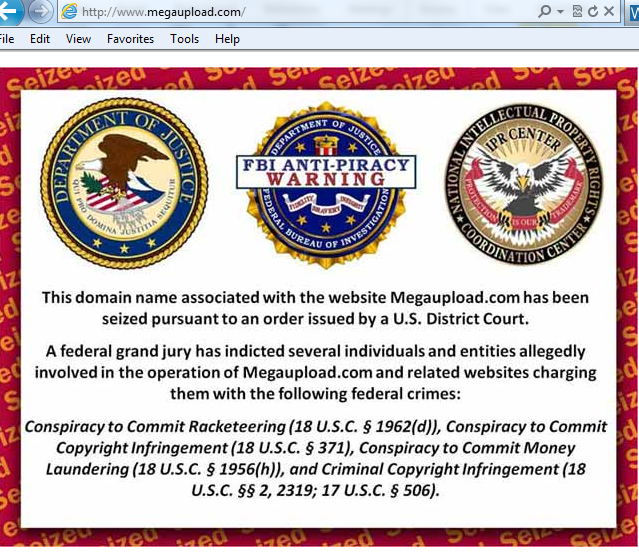 Thanks to Anonymous for commenting here on my Megaupload post yesterday and for explaining that one of the rationales for the Stop Online Piracy Act and the Protect IP Act is that this legislation is purportedly necessary because there is allegedly no remedy against rogue websites that operate offshore.

I immediately went to Chapter 7 of my Copyright Litigation Handbook and found the Metro-Goldwyn-Mayer Studios Inc. v. Grokster, Ltd., 243 F.Supp.2d 1073, 1087 (C.D.Cal.2003) case.   As I recalled, that court found that Grokster/Kazaa had subjected itself to jurisdiction by the nature of its contacts with the forum state.   There, jurisdiction was exercised over a company that had moved to the island of Vanuatu.

This Grokster rationale has been used by a few other courts in exercising jurisdiction over offshore/foreign "rogue websites".   Below are a few cites that basically support the proposition that our existing copyright law has substantial remedies against rogue websites that permit or promote infringement of U.S. copyrights.

Other jurisdictions, such as Germany or India, also have courts and laws that will enforce U.S. copyrights.  So the claim by SOPA and PIPA supporters that remedies don't exist is a bit mystifying.   Of course to remedy some of these injuries, a company might have to leave the comfort of home, but there is a pretty strong reason that we consult German courts and the German justice system, for example, before shutting down a German website.

Additionally, I considered the Second Circuit's decision in Penguin Group (USA) v. American Buddha, 640 F.3d 497 (2d Cir. 2011) which permits a copyright owner to bring suit in NY when the owner of the copyright is injured by an illegal download outside New York.

I would be happy to hear from anyone who can cite cases to the contrary or assist me in better understanding the counterargument.

Thus even without considering the evidence offered in the declaration of Bruce Ward the Court can find that the download of music files by Henriksen constitutes transacting business in the District. As the Court of Appeals in Gorman noted, the fact that the transactions between defendant and residents of the District of Columbia occurred in cyberspace “is not some mystical incantation capable of warding off the jurisdiction of courts built from bricks and mortar.” 293 F.3d at 510. See also Material Supply Intern., Inc. v. Sunmatch Industrial Co., 62 F.Supp.2d 13 (D.D.C.1999) (noting that a single act may be sufficient to transact business and that defendant need not ever be physically present in the district to transact business within the meaning of the statute). All of the aforementioned acts represent transactions between a district resident and defendant that have given rise to consequences in the District.

UPDATED.   Attorney Benjamin Wright has pointed out the Liquid Motors case in which a federal judge ordered the FBI to restore service to legitimate users of a website containing allegedly infringing content. Wright's take on the Megaupload raid and discussion of the case here.

Ray: In Liquid Motors, Inc. v. Lynd, No. 3:09-cv-0611-N (N.D. Tex. April 3, 2009), FBI raided a cloud-type data center and shut it down on charges that the owner of the center was a crook. FBI said it needed to confiscate the whole data center because relevant data was commingled throughout.

Liquid Motors, one of the innocent businesses that used the data center, petitioned a federal court for relief. The shutdown was harming its business. The court compelled FBI to work over the weekend to copy Liquid Motors' data and release it on disks.

The case stands for the proposition that when law enforcement shuts down a cloud service, it must reasonably accommodate the needs of innocent parties. --Ben

Shutting down websites that somehow contribute (by allowance) to the unauthorized distribution of intellectual property is somewhat akin to tearing up roads just because a trafficker used them to transport unauthorized substances. The MPAA and RIAA lawsuits are examples of how current legislation can be used to combat piracy, and there is potential that the volume of complaints will grow:
The RIAA? Amateurs. Here's how you sue 14,000+ P2P users


Anthony
Killing SOPA and PIPA: Did "The People" (or You?) Really Make a Difference?

This is potentially a huge issue and no one really fully understands it. Does everyone realize how bad the piracy is in the world. Take Sony Vegas Pro, it's a Linear Video editing software package that "kids" (not even 13 yet) are pirating it so that they can use the best software out there to make YouTube videos which these kids make MONEY off of. So in a sense due to how contracts are and agreements with using copyrighted material (like video game play) within an illegal software package is NOT GOOD! People are making millions of dollars on their YouTube channels and "some" are most likely using pirated software only because the piracy blocking for keys is just not strong enough to deter people from using it for profit business's.

I know I am off topic but in a sense it's all tied together. The government wants to stop piracy for a reason, because hard working individuals at Sony are more or less getting screwed IF Sony can't make money on their software because people are in essence stealing it, which then makes them put pressure on the legislation and government to go after these piracy type torrent sites etc etc BUT that's a very tough debate to have as I am not aware of all the facts regarding megaupload. I actually have just decided to continue this at my own Google based software BlogSpot website. Link is here: ubuntuaddicted.blogspot.com