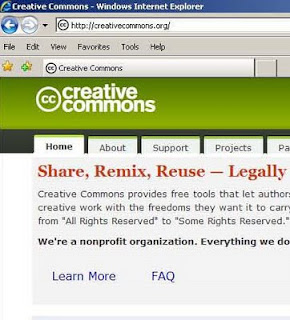 For a number of years, activists dismayed at how commercial enterprises exploited copyright agitated to change the nature of how copyrighted works affected creative collaboration. They imagined a world of greater creative collaboration where everyone would still be able to make a living.
Authors, artists and musicians who wished to have their works used in others' materials could signify their interest.
Information and tools to understand this movement, including the "creative commons" marking and sample licenses are available at the Creative Commons website.
Wikipedia is a stunning example of this type of creative collaboration.
But what about the making money part? If you put your work on the internet and tell everyone that they can use it, are these very creative "creative commons" licenses going to eventually help you make a living? Can these licenses be enforced? And if someone ventures beyond the terms of the license, is that a breach of contract or is it copyright infringement?
The issue went from an interesting and hotly debated academic question to a tremendous commercial reality with the advent of the "open source" software movement, which adopted a creative commons-type license. Essentially, software programmers put up programming code that anyone can download, modify, use and distribute for free, as long as the "borrowed" or "open source" code is clearly indicated and enabled for the distributee to copy, download and use.
On August 13, 2008, the Court of Appeals for the Federal Circuit decided Jacobsen v. Katzer, 2008 WL 3395772, a decision that reviewed a district court's denial of a preliminary injunction to the owner of programming code who sued a person who downloaded his code, removed the identifying materials, and sold a new software package commercially.
The district court found that the open source license was an intentionally broad non-exclusive license unlimited in scope. Rather than being a matter of "copyright infringement", the issue became one of "breach of contract". The district court's holding meant that the owner of the open source code would be stripped of powerful rights and remedies available in federal court to copyright owners who are victims of copyright infringement, including the right to injunctive relief.
Generally, a copyright owner who grants a nonexclusive license to use copyrighted materials waives the right to sue the licensee for copyright infringement. But where a license is limited in scope and the licensee acts outside the scope, the licensor can sue for copyright infringement.
The Court of Appeals framed the issue as follows: if, under California law the terms of the open source license were "conditions" for the use of the copyrighted materials, then use outside such conditions would be copyright infringement. If, however, the terms of the open source license were "covenants" under state contract law, then the open source owner would be limited to remedies for breach of contract.
Analyzing the terms of the open source license, the Court of Appeals found that its provisions were "enforceable copyright conditions" for the use of the copyrighted material and that copyright remedies would be available to the owner.
The Court of Appeals decision contains an excellent discussion of the commercial benefits flowing from open source collaboration that cannot be measured in terms of traditional royalties. This is a well-reasoned opinion that is a strong victory for the owners of these copyrighted works. According to Creative Commons, it is estimated that approximately 100,000,000 works are licensed under various Creative Commons licenses. The court noted that both Creative Commons and the Wikimedia Foundation filed friend of the court (amicus curiae) briefs in support of the appeal.
While the question of how or if many of these copyright owners will seek or achieve returns on their investments is an open one, this case is a clear victory for the rights of copyright owners who want to make their works available through the digital commons.
Posted by Ray Dowd at Saturday, September 06, 2008